Users don't always use your system as intended. I led the charge on a new feature that helped users stay organized and increased engagement.
Product Management
UI
UX
Visual Design
Project Overview
During one of our regular team meetings, I asked the team why we had some job postings on our site that had been up for a LONG time. Like a few months long time. I learned our sales staff and accounts team had been pushing an idea for "evergreen" job postings. Postings that were live on our site indefinitely as a way to capture talent.

Now, this was a normal reaction. We were in the early stages of our company and the team was just responding to the wants of the customer, and a lot of them wanted a way to capture resumes for their talent pools, even when they weren't actively hiring.

But, I knew this needed to change, and fast. Job seekers don't waste their time with old job postings. 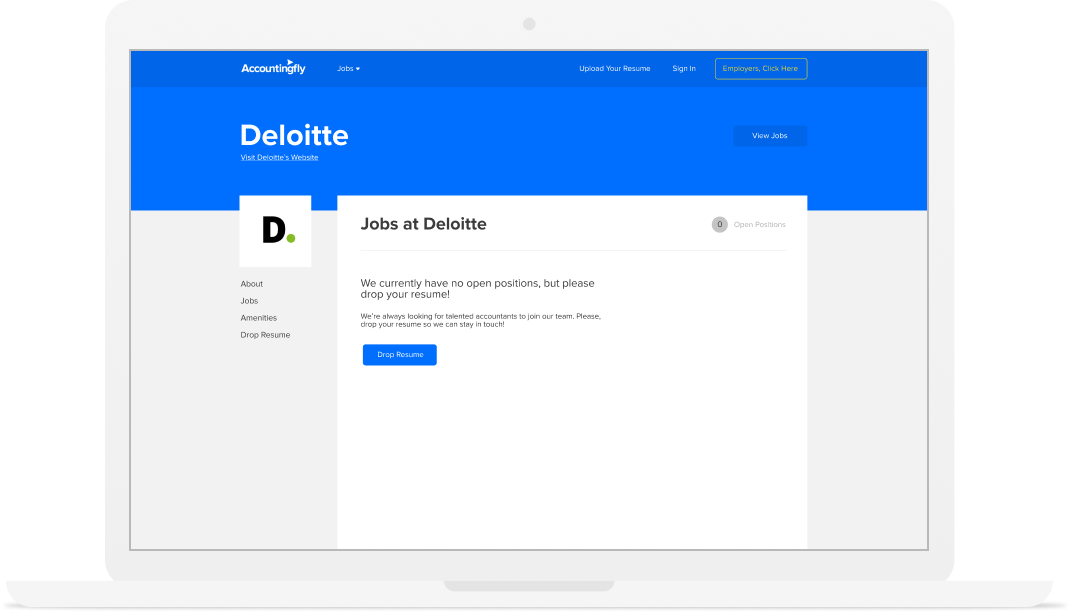 The Jobs page w/ Resume Drop
Design Responsibilities
I wore all of the design hats at Accountingfly, so in addition to the research portion of the project, I was responsible for prototyping, designing and building the new process with HTML and CSS and committing my code using Git.
Research
First thing's first, I sat down with the sales and accounts staff and just asked them what was this in reaction to? What were the customers asking for exactly? What was the goal in keeping these job postings up, even though they knew they looked old?

The desire for this "feature" really boiled down to one thing:

Customers didn't want to lose out on meeting a qualified candidate. Even if they weren't hiring.

I dug a little deeper on this. It turned out that even if the company wasn't actively hiring, that if a qualified candidate's resume came across their desk, they would basically find a way to fit them onto the team.

But also, companies actively built "talent pools." Essentially folders of resumes that they could pull from when they needed seasonal or full time help.

So the conclusion was that our sales staff was using existing functionality to meet the desires of the customers even though that meant that the other half of our user base was seeing nothing but stale job postings.

Furthermore, the expectation of candidates was that they were applying for an open position, when that really wasn't the case.
Design
As I said before, we needed to fix this problem fast. Because our jobs not only looked stale, but we partnered with other job boards for distribution, and they weren't even accepting our old job postings.

I thought, how could we use what we've already built to solve this problem?

Customers wanted the exact same information that our applications collected. So we could definitely repackage that functionality. But where does this action live? What is called?

I thought back to our early days as a company when we were "CollegeFrog." See we started as a recruitment platform for college grads in the accounting space and I remembered a phrase from those days called "Resume Drop." This is a term not exclusive to accounting, but definitely relevant. It was an analog action where a student would drop their resume to an accounting firm at the annual "Meet the Firms" event.

Perfect. I now have a term that is familiar and whose process very closely represents what the customers want.

But still, where does this action live? How is it found? Well, it should definitely live on the company's profile page. So we copied our application functionality, put a button on the company's profile and gave them a new page on the platform called Resumes where they could access all of the dropped information.
First Challenge
During testing though we realized a huge problem. With the job postings gone, the company's no longer appeared in search results.

Now, this was sort of the whole point right? Customers were getting visibility on our search results pages, driving candidates to apply. Without appearing here, candidates wouldn't even know the company existed.

We took a look at our analytics and found that a vast majority of our users were searching by location, rather than by keyword. This was good news because we now had a solution. We could list the companies in that location (and nearby) alongside the open job postings. This would give companies visibility even without job postings.
Post-Release (Second Challenge)
After more testing, and reviewing the staging site with some customers we launched the new feature to great success.

Actually, too much success. We had placed the resume drop so prominently on the company profile, that candidates saw this option as their main call to action. They were dropping their resumes as opposed to applying to a job. I even talked to a a handful of candidates who said "It just seemed more important of an action" and "I figured the Resume Drop would go straight to someone important."

There was a common header element across all of the company's profile pages; Jobs, About, etc.. We placed the button on this common element, but after the feedback, we moved it just to the About page, which was the first page you would see after navigating from the search results page.

Some post-release QoL updates for Resume Drop:
Results/Conclusion
This was probably the most impactful release during my time as Product Manager at Accountingfly. Engagement with companies on our platform increased dramatically, and customers were absolutely delighted to be receiving so much inbound interest.

Resume Drop became a way to keep customers on our platform all year round, as opposed to the seasonal nature of hiring in the accounting industry. And this meant that we could move towards more of a subscription-based pricing model allowing for a more reliable stream of income for Accountingfly.

hello@mynameiskyle.com
